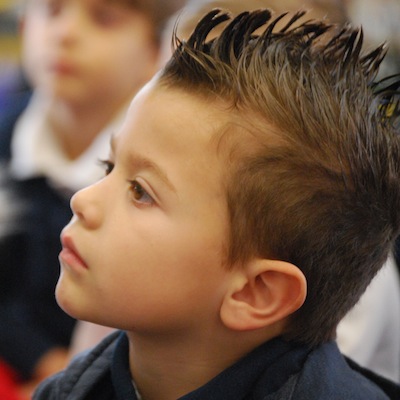 Credit: Lillian Mongeau/EdSource Today
A boy listens to his teacher during his transitional kindergarten class in Long Beach.

Credit: Lillian Mongeau/EdSource Today
A boy listens to his teacher during his transitional kindergarten class in Long Beach.

Three proposals put forth today during budget subcommittee meetings in the Assembly and Senate would restore tens of thousands of publicly funded child care slots in the 2014-15 state budget.

The proposals would restore at least 40,000 child care slots for children from low-income families. Proposed costs range from $439.5 million to $650 million. The California Child Care Resource and Referral network has created a chart comparing the three proposals.

More than $1 billion was cut from state-funded child care and preschool programs during the recession, resulting in a loss of 100,000 child care slots. A small portion of that, $55 million, was restored in the 2013-2014 budget.

Despite pressure from advocates who say investing in early care results in future savings and Senate leaders who have made early childhood education their top priority, Gov. Jerry Brown has not made any move to restore funding to the state’s early child care and education programs. Announcing his May revision of the 2014-15 budget proposal last week, Brown made no mention of the issue. Nor has the governor made any move to support the proposed expansion of transitional kindergarten.