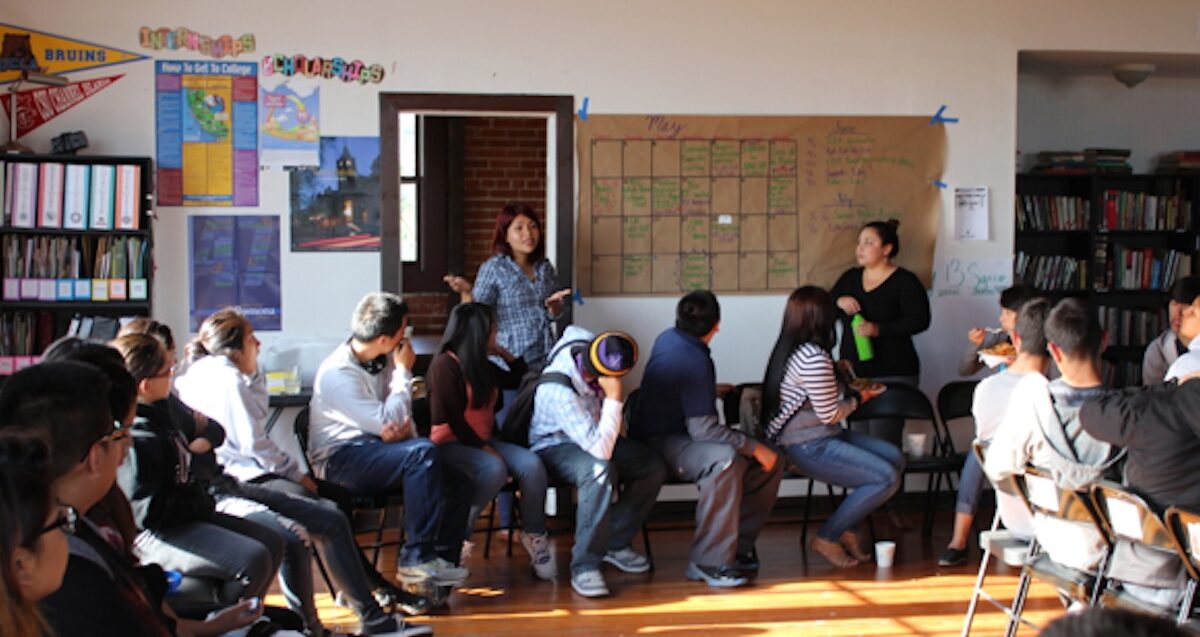 For East Los Angeles community organizer Maria León, parent and student engagement in neighborhood schools is nothing new. Her community has spent the past decade making L.A. Unified district officials listen and respond to its needs, long before districts were required to do so under California’s new Local Control Funding Formula.

León is a member of InnerCity Struggle, an advocacy group in East Los Angeles that has organized students and parents to reform some of the lowest-performing schools in the state.

The ground-level organizing strategy — student-to-parent and parent-to-parent — that the group has used for more than a decade means that East Los Angeles is poised to fully participate in California’s new approach to holding schools accountable.

Under the Local Control Funding Formula, put in place last year, districts and schools are expected to involve local communities in determining how to spend their funds to improve student performance.

What sets InnerCity Struggle and Community Coalition, a similar organization in South Los Angeles, apart is that they organize both parents and youth and focus on ongoing education issues, said Peter Rivera, senior education program officer for the California Community Foundation in Los Angeles.

“They are not one-cause oriented,” he said. “They have a model of engagement you typically don’t see in districts.”

Unlike other groups that push for change, the two organizations have “street credibility that has been developed and cultivated over time,” said Steve Zimmer, an L.A. Unified school board member.

“They have deep respect for the young people they work with,” Zimmer added. “That’s why they’ve been effective. When I choose to embrace a policy they bring to me, I know it’s got some real strong roots. When I choose to challenge a policy in any way, I don’t do it lightly.”

In the past decade, Zimmer said, “I think you’d be hard-pressed to find more effective organizations in changing policy in this district, or in any school district.”

Empowering parents and students to be decision makers in their schools is “tough work,” said Ryan Smith, executive director of Education Trust–West, a group that seeks to narrow the achievement gap, and former director of education programs and policies for United Way of Greater Los Angeles.

“That work needs to be done over years,” Smith said. “InnerCity Struggle and Community Coalition are real role models for the way this can be done, not only in Los Angeles but nationwide.”

The parents and students involved in the efforts say it has been a long, hard, ongoing struggle.

“We had to fight with LAUSD to get a new school,” said León, a plain-spoken mother and grandmother who has lived in Boyle Heights, a low-income neighborhood east of downtown Los Angeles, for 30 years. “Then after it was built, we had to fight with the district to change what education should look like.”

InnerCity Struggle’s work led to the opening in fall 2010 of Esteban E. Torres High, the first new school built in 85 years in East Los Angeles. Named after a local congressman, the campus — with three-story gray buildings, a huge amphitheater, an arena and an underground parking garage — looks formidable.

But inside it is divided into five smaller high schools of about 450 students each. The small schools are focused on academic themes: art and technology, engineering, social justice leadership, performing arts and urban planning and design. Teacher teams in each school have control over the budget and curriculum and elect the principal, something the community fought for, said Henry Pérez, associate director of InnerCity Struggle.

Further organizing efforts led to the district’s decision to make Torres a community school, offering after-school programs and a wellness center that provides physical, mental and reproductive health care to students and their parents, Pérez said.

Students and parents in South Los Angeles also have pushed L.A. Unified to remake John C. Fremont Senior High, which is undergoing an $80 million renovation, into a community school.

“You need to have everyday people, the students and the parents who are impacted by the changes, to be driving them,” said Sandra Hamada, an organizer with Community Coalition in South Los Angeles.

“You need to have everyday people, the students and the parents who are impacted by the changes, to be driving them,” said Sandra Hamada, an organizer with Community Coalition, which worked with the students and parents at Fremont High. “There are administrators who change, district staff who change, even the superintendent and board members change. But who will always be here and will always have the investment is the community.”

Having an organized community that does not give up “is a really good way to keep reforms in place when leadership changes,” Rivera said. He refers to such tenacity as “community will.”

Hamada gives the example of how Fremont students worked to bring programs that link rigorous academics with career training in specific fields, such as health or the arts, to their district and their campus.

Beginning in December 2009, the students held town hall meetings with then-Superintendent Ramón Cortines, who again leads the district as interim superintendent after John Deasy resigned. Cortines told the students and their parents that he was committed to the idea of bringing this curriculum to Los Angeles.

But Deasy replaced Cortines in January 2011, before the programs had started. A few months after taking over, Deasy unveiled the list of schools chosen to pilot the new curriculum. Fremont High was not on it.

“We needed to organize all over again,” Hamada said. “So we had a town hall meeting with the new superintendent that summer.”

After that town hall meeting, Deasy said he would add Fremont High to the cohort of schools. The program, Global Arts and Media Academy, was launched this fall for freshmen.

Ellen Pais, president and CEO of Los Angeles Education Partnership, which was involved in the effort to create Torres High, said it is important to continuously build on the successes the groups have won.

Students from Torres meet after school most days at the neighborhood community center, a yellow, two-story stucco building that was a former Masonic lodge, with high ceilings, well-worn hardwood floors and a bare-bones kitchen.

“People think that youth don’t care about going to school, that they just want to hang out with their friends,” said Alejandra Meza, who was a student leader at Torres High during the effort to create a community school. The daughter of immigrant parents, Meza is a freshman at Pasadena City College and says she has a duty to her family to get a good education and succeed in life.

She plans to continue her advocacy by studying Chicano studies in college, going to law school and then returning to her community.

Community organizations often tap into the potential of students, such as Meza and Alfonso Aguilar, now a senior at Fremont High, to take on leadership roles for the first time.

In the middle of his first semester in high school, Aguilar met an organizer from the Community Coalition, who asked the quiet, serious student who wanted to become a forensic pathologist to attend an after-school program sponsored by the group to learn how to become a leader in his community.

Before the training, “I was very, like timid,” said Aguilar, whose earnestness and presence held the attention of the 40 or so of his fellow students assembled in a classroom at Fremont High during lunch one day last spring.

“Now I’m actually comfortable talking to you guys and letting you know why I think what I’m doing is important and why I think this will help our community,” he said.

Aguilar led a discussion about the campaign for a “student need index” that would be used to determine how some funds are distributed in L.A. Unified. Students discussed how to engage social media in the effort, with ideas for hashtags ranging from #weneedmoney to #schoolsneedequity to #betterourfuture.

Those supporting the index said the district should consider factors outside the school, such as asthma rates and violence in the community, in determining which schools should receive more funding. Fremont High’s neighborhood was devastated during the crack cocaine epidemic in the 1990s. Most of the small, pastel-painted stucco houses surrounding the school still have iron grates over the windows.

The school board approved the student need index, and Fremont High was one of the schools to receive extra funds.

“I liked being involved here because we didn’t talk about change, we did it,” said Briana Lamb, a Fremont High graduate who is a freshman at California State University, Northridge. “Just showing students that somebody does care, that gives them the extra push to want to succeed in school and actually graduate and go to college and do something positive.”