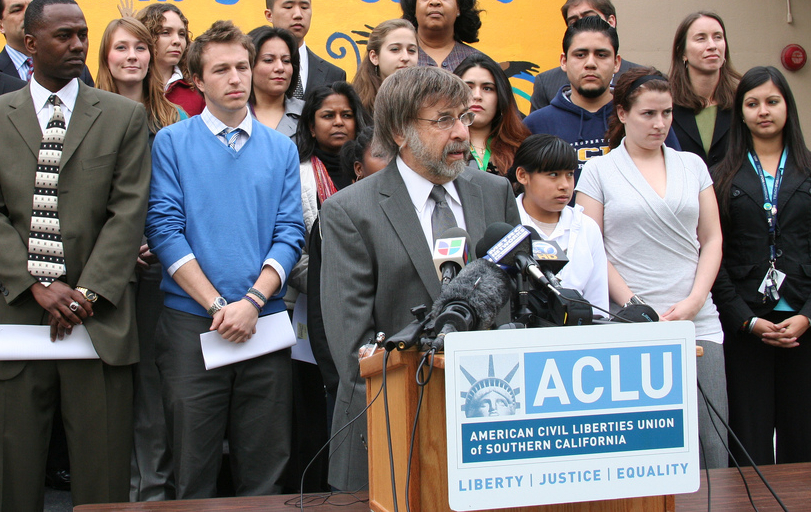 A judge has ruled that the state is ultimately responsible for seeing that school districts provide services to all English language learners not receiving the help they need to become proficient in English.

Los Angeles County Superior Court Judge James Chalfant ruled Tuesday in the lawsuit that the ACLU of Southern California and the Asian Pacific American Legal Center brought against the state Department of Education, the State Board of Education and state Superintendent of Public Instruction Tom Torlakson. The lawsuit, filed last year, claimed that the state failed in its legal obligation to ensure that all English learners get the language instruction to which they were legally entitled. The half-dozen unnamed English language learners in the lawsuit were among the 20,318 students whom school districts acknowledged in a 2010-11 annual survey were not being served.

Those students constituted less than 2 percent of the state’s 1.4 million English language learners. The failure of the state to act on their behalf violated a 30-year-old federal law as well as the state Constitutional guarantee that all students are entitled to an equal opportunity for an education, Chalfant ruled.

“A state cannot abdicate its supervisory responsibilities by ignoring credible evidence of persistent or significant district noncompliance,” Chalfant wrote in his 45-page ruling. “If districts fail to provide services (to English language learners) and the state has notice of this failure, the state has a duty … to take reasonable action.” Chalfant ordered the state to present a plan that will ensure services are effectively provided.

“It’s unfortunate that we had to go to court to get state officials to pay attention when children are receiving no services whatsoever,” said Mark Rosenbaum, chief counsel for the ACLU. “This ruling said English learners count.”

The state issued no response to the ruling and has not indicated whether it intends to appeal the decision.

“It’s unfortunate that we had to go to court to get state officials to pay attention when children are receiving no services whatsoever,” said Mark Rosenbaum, chief counsel for the ACLU. “This ruling said English learners count.”

In his ruling, Chalfant referred to a brief that the federal government submitted on behalf of the ACLU agreeing that the state had not met its legal responsibility. “California’s (English language learner) students cannot afford to wait any longer,” wrote acting U.S. Attorney General Jocelyn Samuels.

The lawsuit was filed in April 2013, before the state Legislature passed the Local Control Funding Formula, shifting most authority over spending decisions from the state to local districts. The law provides additional money for English language learners and requires that districts provide extra services to those students and be held accountable for the results.

The new funding and accountability system wasn’t at issue in the lawsuit. Chalfant’s ruling, however, could serve as a reminder that, in the end, the state remains responsible for meeting children’s basic educational rights.

The state also receives federal Title III money for English language learners ­– about $105 per student ­– and is responsible for monitoring the use of the money and for enforcing the federal Equal Education Opportunities Act.

It did that through an annual Language Census and onsite evaluations of about 60 districts per year (about 6 percent of districts overall, with larger districts reviewed more frequently). The self-reported survey asked districts to categorize the type of services it provided English language learners. There was also a box to indicate no services were provided. That’s where the 20,300 figure, checked by 251 districts, was derived.

The state argued that the annual survey was designed as a planning document, not for monitoring purposes, because it was prone to data entry errors and other problems. As proof, the Department of Education sent a letter to districts after the lawsuit was filed, giving districts a chance to verify the data and correct mistakes. Some did. The Grossmont Union High School District, for example, said mis-categorization was why 1,389 students were identified as not getting English language services.

Rosenbaum called the department’s letter an effort “to try to twist the arm” of districts to redo the data they already had certified.

Chalfant called the state’s argument a “red herring,” because the state failed to follow up with the 60 percent of districts that didn’t respond to its letter or to document whether the answers were accurate. And it ignored evidence that some students weren’t getting help. “The state failed to show that the reports are so unreliable that they lack credible weight,” Chalfant wrote.

The state Department of Education discontinued the annual language survey after 2010-11 but continued to collect data on districts’ English language services through the new statewide student data system, CALPADS. But last year, the state no longer sought information about students receiving no services, Chalfant noted.

The only action the state took was to modify the reporting requirements in 2013 “so that it will be impossible for districts to make such admissions in the future,” Chalfant wrote.

“After we filed the lawsuit, the state shot the messenger,” Rosenbaum said.