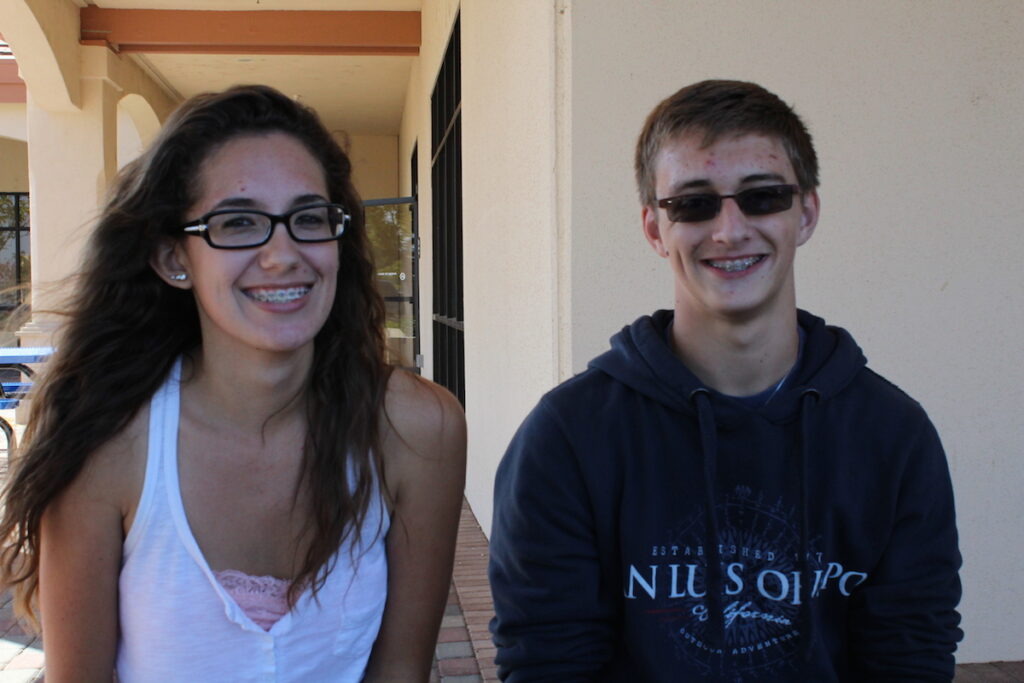 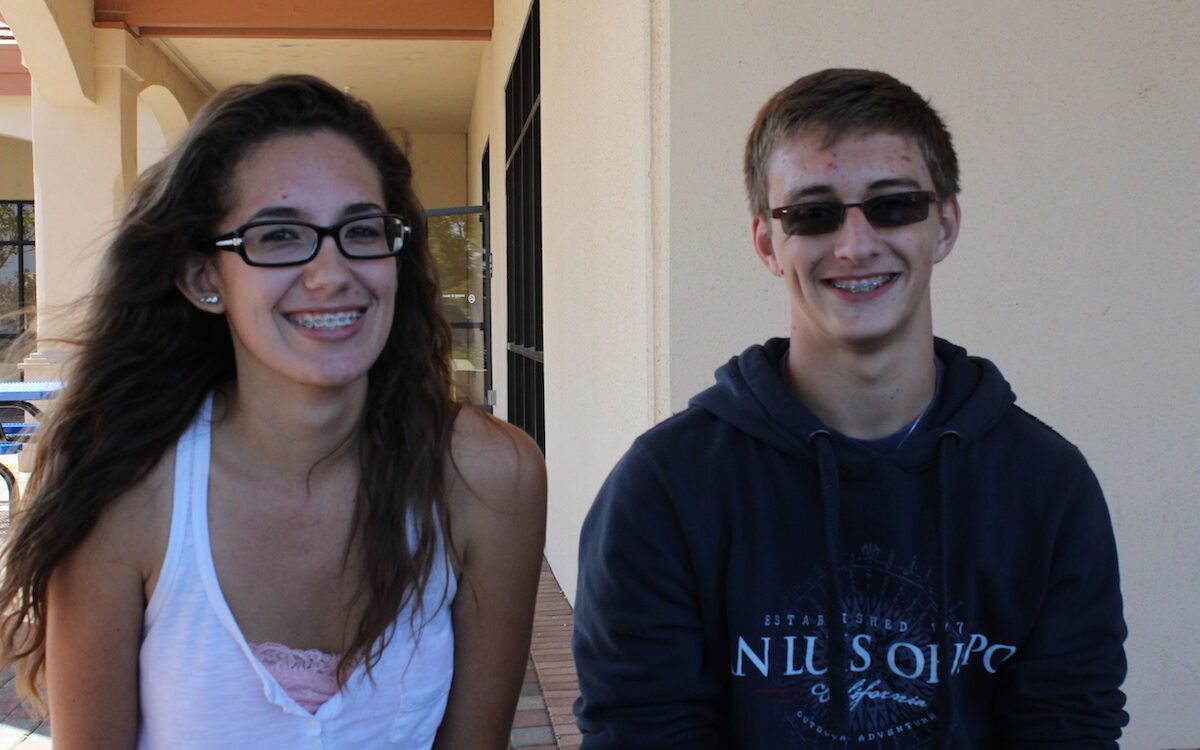 The mock trial was just getting heated when 11th grade history teacher Stephen Hoffman regrettably had to cut short the debate over Capt. Thomas Prescott’s guilt or innocence during the Boston Massacre.

After all, some of these high school juniors had college classes to attend next period.

Middle College High is a public high school in the West Contra Costa County Unified School District, but the campus is located at nearby Contra Costa College in San Pablo. The school’s 300 students take high school and college coursework simultaneously, and most of them will graduate with both a high school diploma and an associate degree. At the very least, every student will be able to accrue up to 60 transferrable, lower-division course credits in addition to their high school diploma.

“Not a lot of students get the chance to even see a college by the time they’re applying” for admission, said Middle College senior Robert Ford, 17, who will have earned enough credits for an associate degree and a diploma when he graduates in May. “I feel that actually going to school on a community college campus has been beneficial to me and my college aspirations.”

An increased focus in California and across the nation on better preparing students to succeed in college and careers is translating to more interest in programs like those offered at middle college high schools and their similar counterparts, early college high schools.

The programs are generally tailored to students who are underrepresented on college campuses, such as low-income students or those who are first in their families to attend college.

Middle college and early college high schools follow similar models – offering college credit to students and intense academic support in a small-school environment throughout their high school career – but they have different histories.

The middle college high school model was launched in 1974 at LaGuardia Community College in New York City. Its purpose was to serve students at risk of dropping out by providing them with a rigorous academic setting on a college campus.

“The idea was instead of remediation, you would put them in an environment where they were with older students from their neighborhoods, and you’d push them ahead and support them,” said Cece Cunningham, a former principal at the LaGuardia campus who now serves as executive director of the New York-based Middle College National Consortium.

Nine community college districts in California can now host middle college high schools, which are operated through partnerships with K-12 districts and the colleges.

Early colleges began in the early 2000s, largely seeded with funding from the Bill and Melinda Gates Foundation, the Ford Foundation and others, according to information from the Middle College National Consortium.

Many early colleges were designed to offer a fifth year of support for students, said Sherry Balian, president of the California Coalition of Early and Middle Colleges and principal of the Middle College High School at San Joaquin Delta College.

Over time, however, the terms have “kind of morphed,” Balian said, and have come to be used interchangeably for the high schools that put students on an early fast track to a college diploma. Given the rising cost of college, the programs are also gaining interest from families looking to cut down on the time and expense of an advanced degree.

“In high school, you can kind of just slouch back, but in the college courses, they expect so much more of you,” said Ryan Campbell, a sophomore at Vacaville Early College High School.

“You can take a student who might be very much middle of the road and when you put them on a college campus and put them in a college class, it’s amazing to see how they rise to the occasion,” Balian said. “We who are college educated sometimes forget there are families out there for whom college is a foreign territory. And to get these kids on a community college campus – it’s like opening their eyes that college truly is for everyone.”

Today, about 65 early and middle colleges operate in California. Most of the programs are free or offered at little cost to students, although costs vary by program.

For instance, students in the Contra Costa middle college are charged a $6 student services fee required by the college, but district funds cover all but $1 of that. Students in the San Joaquin Middle College High School pay $250 a year for their college textbooks, but other costs are free, Balian said.

Entrance requirements also vary by program, but generally students must maintain a grade point average of at least 2.5 in middle school, and may be required to submit teacher recommendations and write an essay as part of the application process. Once in the programs, students must maintain a minimum GPA – in Contra Costa, it’s 2.8 – and maintain strong attendance and be prepared for a non-traditional high school experience. Most middle and early college programs don’t offer organized sports, for instance, although some students may participate in programs at the district – if they can find the time between an average of about two hours of homework each night.

“Some kids look at the program here and the workload and they say, ‘No, thank you, that’s not for me,’” Balian said. “There needs to be a certain level of maturity to exist in a community college environment. They kind of have to have the drive to do it.”

And the campus numbers are growing, with new middle and early colleges recently winning approval in the Rialto and Fairfield-Suisun school districts.

One of the newest programs, Vacaville Early College High School, opened last year in partnership with Solano Community College. About 80 students – 50 freshmen and 30 sophomores – split their time between classes at Will C. Wood High School and Solano College’s satellite campus in Vacaville.

Students said they were drawn to the program for the chance it offered to get a jump on their future.

“None of my family have ever been to college before,” said sophomore Gabriella DuClair, 15, who wants to be a pediatric oncologist. “I had always known I wanted to be a doctor, but I didn’t really know if I would ever be able to go to college. If I hadn’t had this, I probably would have ended up going to work. I wouldn’t have been able to go to college.”

Instead, Gabriella has a number of college credits under her belt in only her second year of high school, counting beginning Spanish, American Sign Language, and Introduction to Art among her college repertoire.

For classmate Ryan Campbell, also 15, walking into his first college course at age 14 was “intimidating,” but he enjoys the challenge of the higher-level coursework.

Ryan, who also hopes to become an oncologist, said the program is allowing him to knock out his lower-division general education requirements so he can save time later on. The college setting has helped him mature, he said, and given him insight into what a university will be like.

“In high school, you can kind of just slouch back,” he said, “but in the college courses, they expect so much more of you.”

The transition from high school to college is a challenge for the young students, Balian said, so an important component of early college programs is additional support for students to help them keep up with the rigors of the work. Students also receive additional support to help them register for their college courses, and make sure they’re taking the right courses to qualify for transfer.

In Vacaville, all incoming early college freshmen receive a three-day orientation where they are introduced to college life and the skills they’ll need – everything from note-taking skills to the importance of showing up on time and how to introduce yourself to your professor.

The work is challenging for a lot of students, said Ford, the Contra Costa graduating senior.

“But I think the difference between us and some of the other students in regular high school is how we go about those struggles, how much we learn from it and how good we are at not giving up,” said Ford, a native of Jamaica who moved to the United States when he was 9. “In Middle College, there’s lots of things that are being thrown at you and you can’t simply give up.”

Ford, who serves as student body president at the middle college, hopes to attend the Massachusetts Institute of Technology next year. He hopes one day to become an aerospace engineer and astrophysicist and found his own research company.

He said Middle College has benefited him academically, but more than that, it has taught him how to work with diverse groups of people, feel comfortable around adults and apply himself in different settings.

“Programs like Middle College are really beneficial to students,” he said. “… I think that high schools should have more programs like these.”