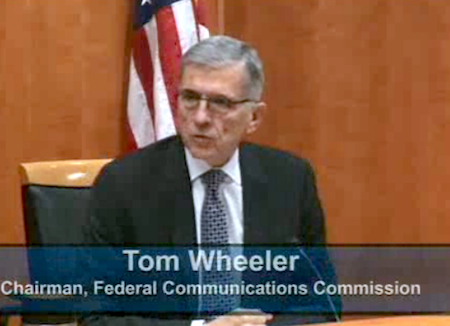 The Federal Communications Commission voted Thursday to increase funding that supporters say will expand the Internet capacity for an additional 40 million students in 100,000 schools nationwide.

The ccommission raised the E-rate, a federal program paid for by telephone customers, by $1.5 billion per year, bringing the total yearly funding to schools and libraries for Internet connections and operating subsidies to $3.9 billion.

“It’s a historic day for students and library patrons,” said Evan Marwell, CEO and founder of Education Superhighway, a San Francisco-based nonprofit that works with districts and states to extend their Internet capacity. He said the additional money, plus other changes that the commission passed, should meet President Barack Obama’s goal of providing 99 percent of students in America with next-generation broadband – between 100 megabits and 1,000 megabits per second (1Gbps) by the end of 2018. That would provide enough capacity for laptops and tablets for all students in every classroom.

The new revenue should narrow the digital gap in California, according to Andrea Bennett, the executive director of the California Education Technologists Professional Association.

“We applaud the effort of the FCC,” she said. “We hope they continue to work on these changes and listen to schools.” In particular, she said the new revenue will help California schools in rural areas, which have the most problems with Internet connectivity.

The staff of the FCC estimates that the new E-rate surcharge will raise the cost of a phone line by about $2 per year. Established in 1997, in the era of slow-speed modems, the E-rate pays for Internet connections and subsidized service to the nation’s schools and libraries. The priority is extending broadband connections to buildings, with leftover money going for equipment for WiFi access to classrooms and ongoing broadband service subsidies. Rural and low-income schools receive E-rate priority.

The E-rate has not been able to keep up with the demand for more broadband, which Marwell says is increasing 50 percent each year. According to the FCC, only 30 percent of schools nationwide – and only 14 percent of schools in low-income neighborhoods — currently have the targeted high-speed capacity. Only 45 percent of districts have the WiFi capability that would enable every student to use a device linked to the Internet.

With nearly three in five districts reporting that the ongoing connectivity costs are the major barrier to faster service, the E-rate expansion should make a difference, Marwell said. E-rate subsidies for Internet service range from 20 to 90 percent for low-income schools. But there hasn’t been enough money in the program to go around. This year, California, schools requested more than $1 billion in E-rate funding, but the FCC committed $290 million, according to data provided by Universal Service Administrative Company, the firm that processes E-rate applications.

The commission also approved incentives for states to contribute to the cost of extending broadband to schools. Marwell said he plans to encourage California legislators to take advantage of the opportunity. He also said that added competition among broadband providers, which the FCC will promote, should lower Internet rates by 15 to 30 percent to school districts.

The FCC had not raised the cap on the E-rate since it was established. Earlier this year, it directed an extra $1 billion for broadband for schools and libraries by diverting subsidies that had gone to outdated technologies.

The five-member commission approved the E-rate changes with a partisan 3-2 vote. Republican members criticized the increased fees and the need for them, according to a report on the meeting in Education Week.