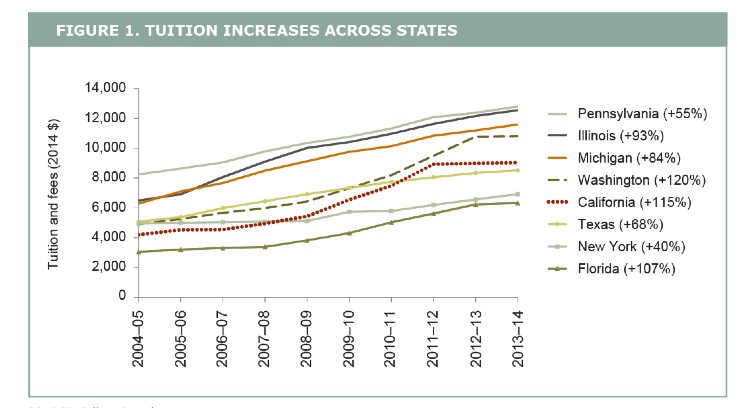 Credit: Public Policy Institute of California.
The combined average tuition for UC and CSU campuses, shown with red dots, soared from 2008-09 to 2011-12, and has remained constant since under an agreement between the university systems and Gov. Jerry Brown.

Credit: Public Policy Institute of California.
The combined average tuition for UC and CSU campuses, shown with red dots, soared from 2008-09 to 2011-12, and has remained constant since under an agreement between the university systems and Gov. Jerry Brown.

State and federal financial aid has shielded low-income and some middle class families from the big tuition and fee increases that the University of California and California State University systems enacted after the 2008 recession, but not enough high school students who were eligible for aid sought it, concluded the Public Policy Institute of California in a report released Tuesday. The report recommended actions to extend access to aid to those who qualify.

“Given the importance of higher education to California’s economic future, policymakers at the federal, state, and institutional levels need to make a continuing commitment to keep college affordable for students from low-and middle-income families,” said PPIC, an independent, nonpartisan research organization.

The report comes amid controversy following the announcement by UC trustees last week that they intend to raise tuition an additional 5 percent for each of the next five years unless the Legislature provides more revenue than planned under an agreement the two higher education systems reached two years ago with Gov. Jerry Brown. Brown, student groups and key legislators immediately said they would oppose any increase.

Low-income students can receive up to $5,500 in federal Pell Grants, plus state Cal Grants of $12,192 toward the price of college at UC campuses and $5,472 at CSU campuses. Students also can put the combined aid toward living costs and books.

The estimated average full cost of attending a UC campus in 2011–12 was $30,472; for CSU, it was $19,267. Financial aid has protected most low-income students from increases in non-tuition costs, too, PPIC found.

In response to the recession and a plunge in state revenue, the Legislature cut general support for UC and CSU 20 percent, from $6.2 billion in 2007 to $5 billion in 2013. Trustees in both university systems responded by more than doubling tuition. California was ranked 34th in average four-year tuition in 2004; by 2013, it was 21st.

Since then, the two systems agreed to not increase tuition through 2016-17, under an agreement with Brown to restore some of the lost state money. The proposed UC increase would appear to violate that understanding.

PPIC recommended that the state make financial aid forms easier to fill out and create inducements for students to apply. It also suggested that districts include the FAFSA completion rate as a measurement in their Local Control and Accountability Plans, which districts are required to create under the new state funding system.