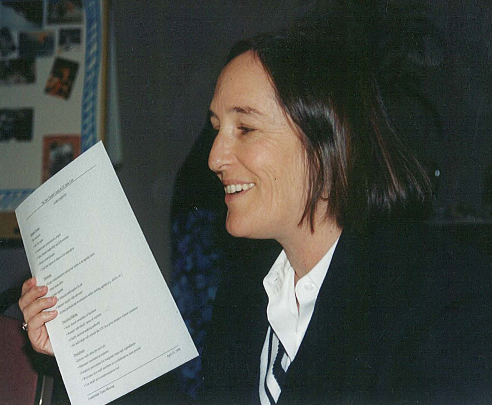 Credit: Courtesy of the New Teacher Center
Ellen Moir is this year's recipient of the Brock International Prize in Education.

Credit: Courtesy of the New Teacher Center
Ellen Moir is this year's recipient of the Brock International Prize in Education.

Moir is this year’s recipient of the $40,000 Brock International Prize in Education, given annually by the Brock Family Community Foundation of Oklahoma City to someone who has made “a significant impact on the practice or understanding of the field of education.” Previous recipients include Stanford School of Education Professor Linda Darling-Hammond, Mike Feinberg and Dave Levin, founders of KIPP charter schools, and Beverly Daniel Tatum, president of Spelman College in Atlanta.

Moir has been in the vanguard of training new teachers in California for more than a quarter century. As the director of teacher education at UC Santa Cruz, she founded the Santa Cruz New Teacher Project in 1988, an innovative support program that provided a model for the state’s Beginning Teachers and Support Assessment. BTSA (pronounced Bitsa) is a state-funded training and mentoring program that enables teachers with a preliminary teaching credential to qualify for a permanent or “clear” credential.

In 1998, Moir founded and became the CEO of the New Teacher Center, which trains districts’ full-time mentor teachers. In accordance with New Teacher Center  requirements, the mentors meet with new teachers one-on-one an hour to 90 minutes each week.

The center has offices in eight cities, including San Francisco, Los Angeles and Santa Cruz. Moir said the center guides teacher induction programs in 26 of the nation’s 200 largest school districts, with plans to grow to 60 of the largest districts by 2018. In 2012 it received a highly competitive grant from the federal Department of Education Investing in Innovation Fund to replicate programs in Chicago, Broward County, Fla., and rural Iowa.

“We have really influenced America in understanding the importance of new teacher development,” Moir said, pointing to data showing the  value of rigorous new teacher training programs. While nationwide more than half of new teachers quit the profession within six years, the retention rate by year six at the Santa Cruz New Teacher Center was 88 percent, according to the center.

And yet Moir is worried about the future of induction programs in California. Under the Local Control Funding Formula, districts will decide how much, if anything, to spend on BTSA programs. Good programs will survive, she said, but some districts may cut back their funding or charge teachers for the training. “One of the unintended consequences is that some new teachers are gong to be left on their own,” she said. “We may see inequities across the state.”