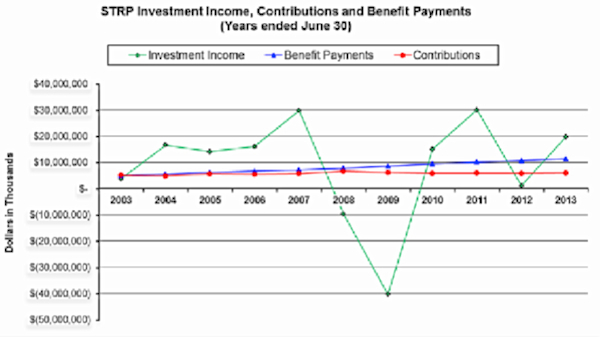 Riding the wave of record high stock prices on Wall Street, the fund providing pension benefits for California teachers and school administrators reported Monday that it earned a return of 18.66 percent on its assets for the year that ended June 30.

That’s nearly 2½ times the 7.5 percent return that actuaries say the California State Teachers’ Retirement System must receive annually to fully pay for retirees’ benefits. But even these “extraordinary and very encouraging” numbers don’t undo the need for the big increase in contribution rates by teachers, school districts and the state that legislators approved last month, a CalSTRS spokeswoman said.

CalSTRS has had a lot of ground to make up. During the recession, between June 30, 2007 and June 30, 2009, CalSTRS lost $54 billion, about 30 percent of its assets. Although the pension fund is now valued at $189 billion as of two weeks ago – $17 billion above the previous end-of-year-high in 2007 – it lost billions of dollars in compounded returns over five years.

“A good year is not enough to account for the loss over time,” said CalSTRS spokeswoman Gretchen Zeagler.

CalSTRS’ defined benefit pension program is funded by a combination of earnings on its portfolio of stocks and real estate and contributions by employees and employers (school districts), with the state paying into it as well. In a report two years ago, CalSTRS actuaries said that, in the wake of the recession, it would take “five consecutive years of over 17 percent annual returns, followed by 25 years of meeting the assumed investment return of 7.5 percent annually to become fully funded in 30 years.” That’s also the equivalent of 10 percent returns every year for 30 years – which assumes no economic recession or downturn on Wall Street in between.

Based on these calculations, Gov. Jerry Brown proposed nearly doubling annual contributions. The Legislature approved that increase in June. When fully phased in over seven years, school districts would absorb 70 percent of the roughly $5 billion annual increase  in contributions, with the state and employees picking up the rest.

The latest return marks the second straight year of double-digit returns; it follows a 13.8 percent return in the year ending June 30, 2013. But the return the year before that was only 1.8 percent for a three-year rate of return of 11.2 percent. Its longer term performance was adjusted upward as well:

With 860,000 members, CalSTRS is the nation’s second-largest public pension program. The largest, the California Public Employees’ Retirement System, or CalPERS,  reported  similar earnings on Monday: an increase of 18.4 percent for the year ending June 30.