After-school science begins with a bounce 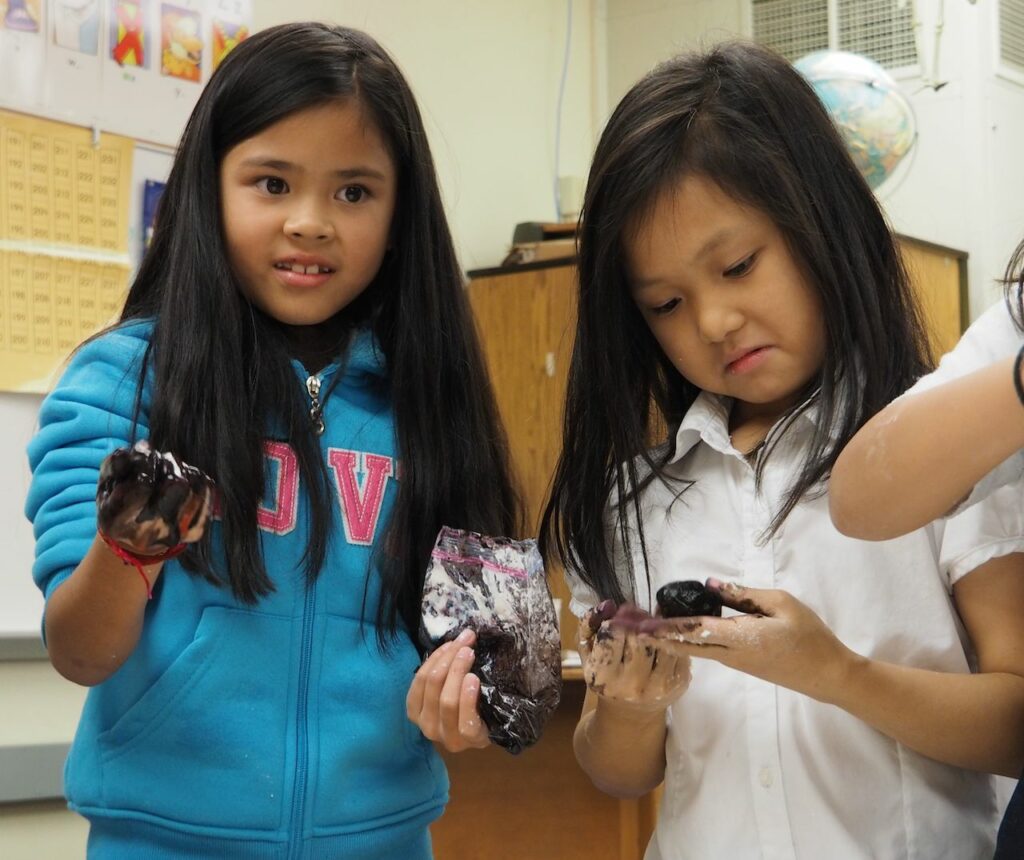 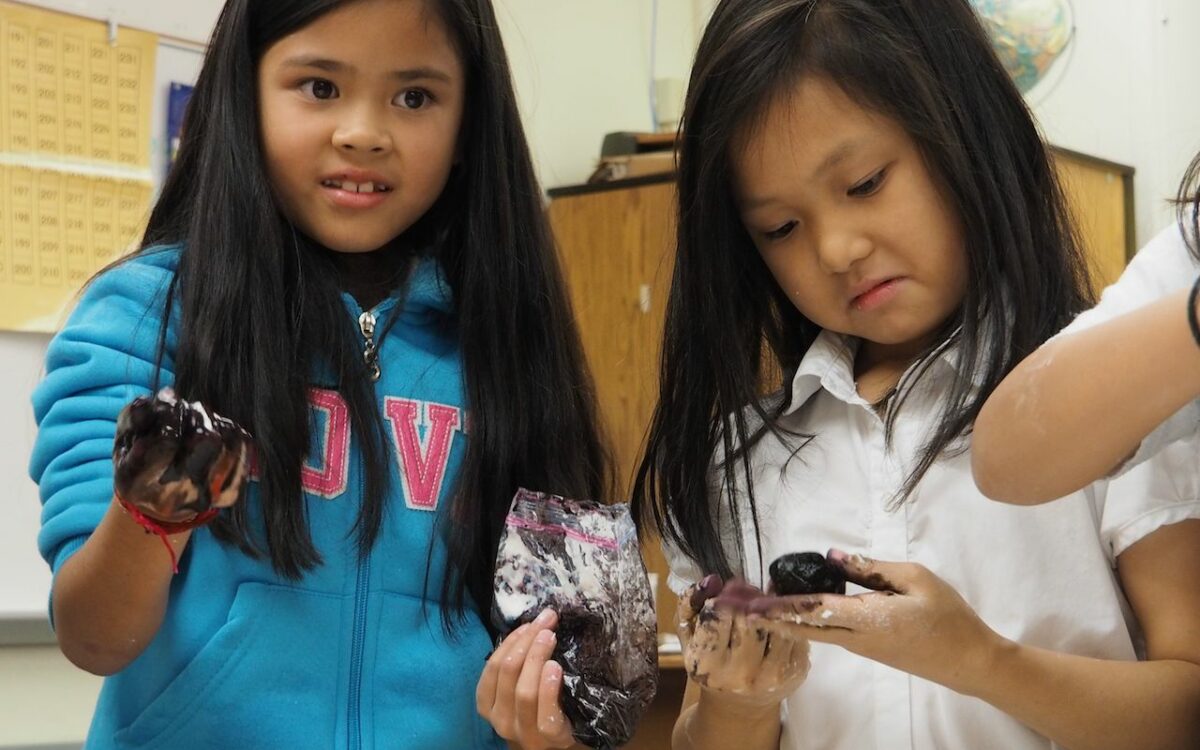 The 4th and 5th graders shook their bodies and moved around the classroom because that’s what free molecules do. They then linked arms with their teacher to form a human polymer.

After understanding what a polymer is – a long string of similar groups of molecules linked together – the students had a chance to manipulate a liquid polymer to make a solid bouncing ball. The students in the after-school program at Garfield Elementary School in Oakland tried different combinations of Elmer’s white glue (the polymer), Borax, corn starch and warm water.

“I always watch experimenting stuff on YouTube, but I never tried it myself,” said Nang Moon, 10, dressed in a bright pink jacket.

In his after-school class on a Wednesday in mid-November, teacher Jeremy Lee was using this interactive approach to help students grasp the Next Generation Science Standards, which are starting to be implemented statewide. The standards include integrating engineering design into science education.

Some districts, including Oakland and San Francisco Unified, are looking to after-school and summer programs as one way to introduce students to scientific and engineering concepts in a more relaxed and fun atmosphere that encourages experimentation.

The Garfield students are also learning how to think like chemical engineers and “talk like mini-scientists – using full sentences and citing evidence,” said Nikita Williams, site coordinator of the after-school program at Garfield, which serves 164 2nd- through 5th-grade students, with about 20 students per class. The East Oakland school educates 700 mostly Latino and Asian students, with almost two-thirds eligible for free and reduced-price meals. Although the program operates on a first-come, first-served basis, teachers encourage parents whose children need extra support to apply. The program highlights science and engineering on Wednesdays and Fridays.

In Lee’s class, the students were focused and supportive of each other’s efforts.

“I liked working together to accomplish something,” said Camren Em, 10, quick to raise his hand to answer his teacher’s questions. “It makes it easier.”

Learning how to collaborate is another key component of both Common Core and Next Generation standards.

The bouncing ball experiment was put together by Techbridge, an Oakland-based nonprofit dedicated to helping girls develop a passion for technology, science and engineering. Techbridge provides projects and trains after-school program staff for both Oakland and San Francisco Unified. The organization has been partnering with Oakland for five years.

“It was important to create a professional development structure,” Blackburn said. “Some of the staff were terrified about doing science and their personal knowledge was low.”

Techbridge understands that they are not dealing with credentialed science teachers, said Tiffani Quan, who is in charge of training the after-school staff. “We have a set of activities specifically written so line staff without the science background are comfortable leading the activity,” she said.

Lee, who is pursuing a degree in business and accounting at CSU East Bay, said science did not come easily to him as a high school student. “It was intimidating,” he said. But he is relaxed and confident fielding questions from his students. He said he wished he had had a similar experience growing up.

“They are learning that they can always go back and redo it – to try again,” said Jeremy Lee, an after-school teacher at Garfield Elementary in Oakland. “This experiment also gives them the sense that there are options rather than one right answer.”

“If students see that science is fun, then they will think differently about it when they get to high school,” he said.

Quan said she trains the after-school staff to ask open-ended or guiding questions.

In Lee’s class, the conversation about polymers ranged from making soft drinks – and why too much sugar is bad for you – to why there are different types of gasoline.

After a group discussion, the students broke into groups of four and mixed the ingredients following three formulas given to them, marking off a checklist that had them describe the “physical properties” of each mixture as liquid, milky, chunky, sticky, mushy, gummy or solid. Most chose mushy.

“Why is it important to test different formulas?” Lee asked the students.

“So an engineer can make it better,” offered Griselda Aleman, 10.

After testing the three formulas – “squishing” the mixtures for one minute, per directions – each student worked on his or her own to find the right combination of ingredients that would make the ball bounce highest.

Some of the balls – including the teacher’s – were flat or watery. Lee gave those students plastic bags of the main ingredients to take home.

“They are learning that they can always go back and redo it – to try again,” Lee said. “This experiment also gives them the sense that there are options rather than one right answer.”

Linda Kekelis, CEO and executive director of Techbridge, said that understanding the importance of failure is one of the most important elements in science education.

“Real science and real engineering is all about what doesn’t go right the first time,” she said. “You go back and tweak and redesign. We want to encourage kids from the start that that is what learning is.”

Students who managed to create a solid ball could make it red, blue, green, yellow or some combination with drops of food coloring.

In Ana Lopez’s class of 2nd and 3rd graders, the chance to create their own colors created quite a buzz.

“I mixed red, green, yellow and blue and got brown,” said Amir Rey, 7. “I think I’m going to have to have more colors.”

Julian Mireles-Zepeda, 7, had made the same choice but with less enthusiasm. “It looks like mud,” he said matter-of-factly.

Amanda Turton, who teaches science at Garfield to all grade levels, said she will often take a peek into the after-school classrooms to see what the students are doing.

“I see them so excited,” she said. “I borrow the ideas for my classes.” Even if the activity is a bit different, the students who participate in the after-school program “get it right away,” Turton said. “Then they can help the others and become the leaders of the class.”

Turton said Garfield students compete in a districtwide science fair each year and have brought home some awards. Last year she picked three projects from her classes and three from the after-school program. The after-school projects included comparing solar ovens made out of aluminum foil and cardboard. The project showed pizza boxes worked the best.

Another project had students figuring out which vegetable was the best conductor of electricity. Think again if you’re eating broccoli during a thunderstorm.

The students seem to agree that science is fun – an initial survey of after-school students who participated in the science lessons found most felt positive about science, Blackburn said. But the program has not yet convinced Jonathan Phuong, 10, and his friends that they want to become scientists.

“I’ve seen scientists in movies,” Jonathan said, as his friends nodded in agreement. “They lose their minds.”