State Board eliminates incentives to offer Algebra in 8th grade 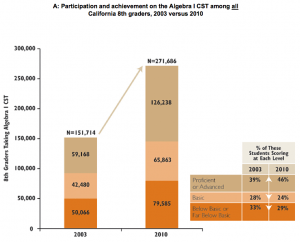 Source: 2011 EdSource study “Improving Middle Grades Mathematics Performance.”
From 2003-10, the number of eighth graders who took Algebra I nearly doubled in California, and the percentage that rated proficient on the state Algebra test actually increased from 39 to 46 percent overall.

Source: 2011 EdSource study “Improving Middle Grades Mathematics Performance.”
From 2003-10, the number of eighth graders who took Algebra I nearly doubled in California, and the percentage that rated proficient on the state Algebra test actually increased from 39 to 46 percent overall.

The State Board of Education voted unanimously Wednesday to remove state incentives encouraging schools to offer Algebra I in 8th grade.

The move was both a vote of confidence in the new Common Core standards for 8th grade, which districts are now beginning to implement, and a retreat from a decade-old policy of pushing universal algebra in 8th grade. Proponents of the state’s current policy are predicting that enrollment in Algebra by 8th grade, which has doubled over the past decade to nearly two-thirds of students, will plummet in coming years.

Under the current policy, students who take General Math in 8th grade, the less rigorous alternative to Algebra, are penalized on the results of their state standardized math test. If they test at the advanced level in General Math, their scores are knocked down one level to proficient, while those who test proficient are rated with only having basic knowledge. This, in turn, affects the school’s Academic Performance Index or API score, the  state’s chief and most recognizable measure of accountability. The penalties were a big reason districts pushed students to take Algebra.

The State Board’s new goal is to create guidelines that lay out two paths for math in 8th grade, one leading to a course based on Common Core 8th grade standards, which is basically pre-Algebra, and an accelerated route leading to a new, as yet, undesigned Common Core Algebra I course. Local districts will decide which students are ready for Algebra; the State Board’s position is to be neutral. Board members have expressed confidence that students who take Common Core 8th grade math will be well-prepared to take Algebra I or a new alternative, an Integrated Common Core high school course, as freshmen in high school. Then they can proceed to higher math, including Algebra II and pre-Calculus, qualifying them for admission to the California State University or University of California by their senior year.

“The decision by a former state board to create penalties and incentives for students to take algebra was probably wrong-headed. The decision about where students are placed for purposes of mathematics should be made at the local level not state level,” said Sue Burr, the former executive director of the State Board and now its newest board member.

Board members noted that Common Core 8th grade math is more rigorous than the current General Math, which does not include pre-Algebra. Removing the penalties on the API will enable districts to ease the transition to Common Core; districts won’t feel pressure to skip from seventh grade Common Core to Algebra.

However, Doug McRae, a retired test publisher from Monterey who has written frequently on the issue in EdSource Today, said that districts will no longer feel any urgency to offer Algebra I, and, as a result, fewer students will be on a path to take Calculus in high school and major in science, engineering and math in college.

“You are lowering standards for those kids who are capable of taking a full algebra course,” McRae said during the public comment period.

Board member Trish Williams expressed the ambivalence shared by others on the issue. In her former role as executive director of EdSource, she directed a study of middle school math that documented impressive numbers of 8th graders, particularly minority students, who took Algebra in eighth grade and did well on the state Algebra test. But the study also concluded that substantial numbers of students were misassigned and were taking it twice and even three times without success. Only 40 percent of African American and Hispanic students are scoring proficient on the Algebra exam – an improvement over a decade ago, but troubling nonetheless.

The increase in minority students taking Algebra “is not insignificant. It was a big advantage for those kids,” she said. “Social justice advocates worry that if pressure is not on then schools will revert and not prepare low-income kids. I hear that and I respect it, and I honor it.”

“It is important that the Board send a signal to schools that we want them to continue to keep open opportunities for low-income kids,” she said.

The Board’s policy to encourage more students to take Algebra was done, she said, with “good intentions.” But the “collateral damage” – too many unprepared students required to take Algebra – is why she said she would vote to change the policy.

Common Core math standards, as revised by State Board, January 2013;

Previous board action on setting policy on Algebra in eighth grade;