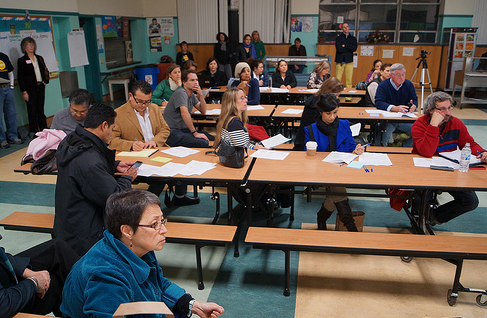 With a change in state law that gives parents a larger role in school budget-making decisions, a first-of-its kind statewide poll by EdSource gives new insight into how involved parents are with their children’s schools and the obstacles to greater parent engagement in schools.

The weeklong telephone survey reached 1,003 parents across California to assess their knowledge of the Local Control Funding Formula law, their overall satisfaction with their child’s school, and to gauge their willingness to become involved in the budgeting process. The poll shows a high level of parental involvement in their children’s schools, but with distinct differences tied to levels of parental income. Most parents say they have never heard of the new law — but indicate a willingness to participate in the decision-making process once they are told about it. The survey was underwritten by The California Endowment and conducted by Fairbank, Maslin, Maullin, Metz & Associates (FM3).

We’ve also presented the results in a variety of formats for your use. The first is a PowerPoint presentation that we encourage you to download and use at community meetings and parent presentations. Also provided is a summary of survey findings and a detailed look at the questions and responses. We’ve also included the news release on the survey, summarizing key findings.

Downloadable PowerPoint presentation on key findings of the poll