Brown lashes out at regulators and testers, makes case for his reforms 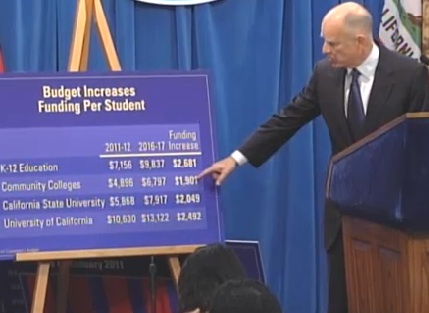 With a caustic critique of excessive testing and overregulation and a fervent call for respecting the “dignity and freedom of teachers and students,” Gov. Jerry Brown laid out the case for returning primary control of education to local hands and distributing state money equitably in his State of the State address.

Brown used the 20-minute speech on Thursday to call on the Legislature to adopt his Local Control Funding Formula, which would phase in substantially more money for low-income students and those struggling to speak English proficiently. This is needed, he said, in order to help districts “based on the real world problems they face.”

Upbeat overall, Brown dwelt on education in his address, in which he praised the Legislature for courage in making overall spending cuts and voters for passing taxes in Proposition 30. The governor vowed to continue to enforce a fiscal discipline to protect against “great risks and uncertainties” that lie ahead. The implication is that he would discourage more funding for social programs – not encouraging for those calling for restoring cuts to preschool and child care. He also pledged to fight any tuition increases for higher education – a line that drew the loudest applause and a bipartisan standing ovation.

Brown has yet to flesh out the details of his school finance proposal, which he outlined in the State Budget plan last week; instead, with a touch of righteousness, he explained the underlying principles for it.

Principle of subsidiarity is the new buzz phrase in Sacramento. Gov. Jerry Brown is citing it in many of his speeches on education reform as the philosophical underpinning for a proposal to shift authority over school spending and decision-making from Sacramento to local districts.

“Subsidiarity,” Brown said in the State of the State address, “is the idea that a central authority should only perform those tasks which cannot be performed at a more immediate or local level.”

But who thought of subsidiarity, and where did it come from? Given Brown’s Jesuit training, it’s no surprise that the governor knows about it. Subsidiarity, from the Latin word subsidiarius, for assistance or help, was developed as Catholic social doctrine by Pope Leo XIII in the late 19th century as the middle way between laissez-faire capitalism and communism: What individuals can do, society should not take over, and what small societies can do, larger societies should not take over. The idea was expanded by Pope Pius XI in a 1931 encyclical. The idea has been seized by religious and political conservatives, including former Republican vice presidential candidate Paul Ryan, as the basis to justify his budget (a claim dismissed as “hogwash” by a writer for the National Catholic Reporter) and by religious progressives to promote projects for the common good  and in the Catholic Campaign for Human Development to promote grassroots projects to end poverty.

Subsidiarity is also enshrined in the Treaty of Maastricht establishing the European Union to spell out national versus joint powers. But it’s also as American as the principle of federalism and the separation of powers – at least according to Paul  Ryan.

In the context of Brown’s push for decentralized control, subsidiarity can be translated as “the locals know best so don’t tread on them.” But it sounds more persuasive in Latin.

One is non-interference with those officials closest to working with students, what Brown calls the principle of “subsidiarity.” It is one way to unshackle districts and teachers from layers of authority, the most remote of which are Congress and the federal Department of Education, “whose rules, audits and fines reach into every classroom in America.”

Brown has lashed out before at the education dictates and minutiae demanded by Washington, particularly in the Race to the Top requirements, the No Child Left Behind law and Secretary of Education Duncan’s refusal to grant California a waiver from it. He picked up that theme again with relish.

“The laws that are in fashion demand tightly constrained curricula and reams of accountability data. All the better if it requires quiz-bits of information, regurgitated at regular intervals and stored in vast computers,” he said and added, to applause, “We seem to think that education is a thing — like a vaccine — that can be designed from afar and simply injected into our children.”

Brown alone cannot undo state or federal accountability laws, but he is promising school districts more flexibility over how they spend dollars to meet them. That’s the pragmatic piece of his plan, and tapping into resentment of Washington has broad appeal. But he’s also calling for legislators to redistribute money to high-needs children, because, he said, “Equal treatment for children in unequal situations is not justice.” Appealing to the altruism of legislators representing districts that won’t get supplemental money will be a challenge.

Reactions to the State of the State

Education advocates and legislators generally responded favorably to Brown’s call for local control and regulation, though some added caveats.

Dean Vogel, president of the California Teachers Association, said in an interview that educators will feel “encouraged and inspired by the governor’s address” because it shows that he “values the opinions of educators.”

“He threw down the gauntlet in terms of micromanaging education and said that to fix education, you’ve got to trust teachers,” Vogel said. “The governor’s criticism of state and federal micro-managing of our schools is refreshing.”

Superintendent of Public Instruction Tom Torlakson praised Brown in a statement “for putting California on the path toward restoring the financial health of our schools” and focusing on students with greater needs. Implying that he hasn’t given up on increased funding in other areas, Torlakson said, “Both early childhood and adult education programs, which have been cut severely in recent years, have a tremendous role to play in strengthening our economy, and I will be working to see they receive a fair share of state resources.”

“There’s much to be said for his mistrust of overreliance on standardized testing and how it has sapped the vitality of the system,” said John Affeldt, managing attorney at Public Advocates Inc., a nonprofit law firm and advocacy organization. Brown is a lone voice in the nation saying that. Teachers are leaving the profession because it’s not interesting to them anymore.”

But on the issue of “subsidiarity,” Affeldt said, “there needs to be more of a balance. His rhetoric tips too far toward letting the locals do it. Under the state Constitution, the state retains the ultimate responsibility for assuring basic equality of education opportunity. The state has to assure that districts exercise flexibility in a way that serves neediest kids.”

Crystal Brown, board president of the parents advocacy group Educate Our State, said she too appreciated that the governor raised the issue of testing. “It needs to be a big part of the conversation,” she said. “He is clear on the problems education is facing and why education needs to be a priority. The elephant in the room is that we’re not funding our schools adequately. Everyone knows that, but no one is discussing it.”

That’s also the view of Assemblymember Joan Buchanan, D-Alamo, who chairs the Assembly Education Committee. She says she shares Brown’s view of No Child Left Behind and his belief that education must be a “richer experience, more than test scores.” And she also agrees with Brown that children in poverty and English learners need more support and classroom time to catch up. But the state is 49th in per capita spending, when regional costs of living are factored in, and she would not support a new system that would potentially leave those districts without high-needs students with flat funding for a decade or more.

Buchanan would normally play a pivotal role in deciding the fate of a financing reform, but Brown has indicated he wants to bypass hearings before legislative policy committees and attach his funding plan to the budget “trailer bill” at the end of the session. Buchanan reiterated her view, which Assembly Speaker John Perez supports, that any plan to rewrite the state’s school finance system must face “a robust review” before legislative committees, with all of the impacts known. There should be no surprises, she said.

This post has been updated. It incorrectly said that Gov. Brown attributed the quote “Equal treatment for children in unequal situations is not justice” to poet W.B. Yeats. Brown actually attributed another quote in his speech to Yeats: “The mind is not a vessel to be filled but a fire to be kindled.” But, as letter writer Richard Moore points out below, that was first said by Greek philosopher Plutarch, not Yeats. (Phew).